An alphabetic inscription written on a jar fragment found at the site of Tel Lachish in Israel and dating back around 3,450 years may provide a "missing link" in the history of the alphabet, a team …

A 17th Century Bishop Was Mysteriously Buried With a Fetus. We Finally Know Why

Bishop of Lund Peder Pedersen Winstrup, of the Churches of Sweden and Denmark, died in 1679. An important and well-respected man, his body was mummified and laid to rest in a family vault in Lund …

Egypt announced on Thursday the discovery of what it termed the "Lost Golden City" in the southern province of Luxor.

A Bronze Age stone slab unearthed in France in 1900 has been rediscovered in a new analysis that deems it to be the oldest known map in Europe.A team of French scientists determined the markings were …

The truth might save us, but fictions sustain us. In his hybrid archaeobiography of local legend Nathan Harrison, a Kentucky-born slave who became San Diego’s first African American pioneer, …

A gigantic, 5,000-year-old complex of long barrows and stone-lined tombs has been unearthed in Poland, after archaeologists investigated lines in crops in a field that they'd seen in a satellite …

A 6,000-year-old skeleton of a partially mummified child and a 10,500-year-old basket were also discovered.A new set of Dead Sea Scrolls, ancient fragments of biblical texts dating back almost 2,000 years and thought to have been hidden during a Jewish revolt against Rome, have been found in the West 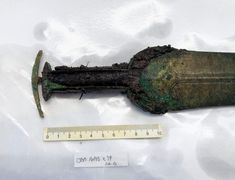 Archaeologists excavating at the village of Håre on the island of Funen in Denmark, have discovered an ornate Bronze Age sword dating from around 3000 years ago.Researchers from the Odense City …

The cats and dogs lie as if asleep, in individual graves. Many wore collars or other adornments, and they had been cared for through injury and old age, like today’s pets. But the last person to bury …

Archaeologists have unearthed an “arena,” or rather, an amphitheater, resembling Rome’s world-famous Colosseum, in Turkey's western province of Aydın. Authorities say the structure, which is mostly … 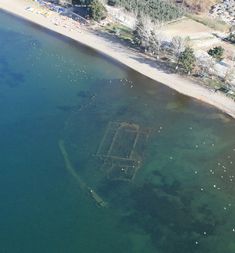 Excavations for a new highway tunnel near Stonehenge have unearthed two burial sites and what may have been an industrial workstation.Archaeologists have uncovered vast troves of Neolithic and Bronze …

Found in Alaska, These Blue Beads Could Be the Oldest Evidence of European Goods in North America

European-crafted glass beads found at three different indigenous sites in northern Alaska date back to the pre-colonial period of North America, in what is an intriguing archaeological discovery.Somehow, these blueberry-sized beads made their way …

The mosque was built in the late 600s.The remains of one of the earliest mosques on record, built just a generation after the Prophet Muhammad died, have been found near the Sea of Galilee in Israel, …